“A reader lives a thousand lives before he dies” – George R.R. Martin.

Hosted by : The Broke & The Bookish

This week’s Top Ten Tuesday is all about our favourite fictional bookworms !

If we’re reading their stories and these characters are reading other stories, who’s reading ours ? 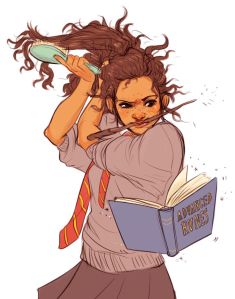 HERMIONE GRANGER : I think she’s going to feature on a lot of lists today but she is one of the most famous bookworms in literature. She went through all her Hogwarts school-books before the very first day, she’s a very good student, and always reads in her spare-time (“I checked this out weeks ago for a bit of light reading.” Ron : “This is light ?”). Dumbledore even leaves her a book (The Tales of Beedle the Bard) after his death. Thanks to her readings, she manages to help her two trouble-makers best friends out of very perilous situations. Where would Ron and Harry be without Hermione ?

Actress Peggy Ann Garner in A Tree Grows In Brooklyn (1944)

FRANCIE NOLAN : For Francie, books are an escape from her daily life, from the poverty and misery around her. She finds in books the answers to her questions. And not only does she read as much as she can, but she also writes. Books, writing and literature will also provide a way for her to access higher education and get chance at a better life.

LIESEL MEMINGER : It’s written in the title how much books are important to Liesel. She starts stealing them before she can even read them. And books will keep finding their way to her, from the most wonderful to the most morbid. She’s a talented storyteller and her words provide comfort to Max in his hardest times.

GILBERT NORRELL : Mr Norrell has the kind of library that would make any of us either drool or die with envy (or both). He’s got thousands of books, each of them old and precious, which he is very protective of (sort of like Gollum and the Ring). He keeps them to himself most selfishly and refuses to let the world know their contents, judging that he’s the only one capable of both appreciating and understanding what’s inside. Not cool, Mr Norrell, not cool. 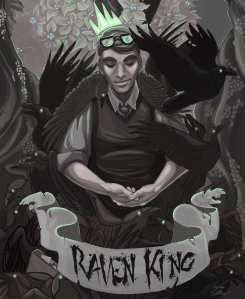 RICHARD CAMPBELL GANSEY THE THIRD : Gansey is desperately obsessed with anything coming close to the Welsh king Glendower and, when he’s not out exploring in Cabeswater, he’s probably pouring over a book and making notes in his journal. If you give him the opportunity, he’ll probably talk about this or that obscure fact he found in this or that obscure book for hours. He’s a man on a mission.

SAMWELL TARLY : Aside from being a sweetheart, he’s also a big bookworm, and not just because he’s one of the rare ones in the Night’s Watch who can read, but because he finds all the books at Castle Black very interesting. It also helps that they might contain clues that could save them all.

AZIRAPHALE : He’s got one big … library ! Actually a bookshop, and I don’t know which one is better. But he’s also a fine collector and knows his stuff when it comes to books. When he’s not out saving the world from Armageddon, you can definitely find him examining one of his finest Bibles.

THE ONES WHO UNDERSTAND ME 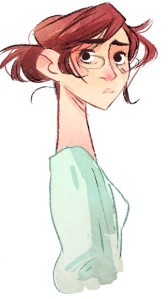 CATHER AVERY : Cath is a fangirl. She loves those books which are besically the equivalent of Harry Potter and she writes fanfictions about two characters from those books who basically are the equivalent of Drarry. She’s a bit awkward and not too sociable, and she’d rather be writing her own fanfic than studying or going to a party. Cath and I would be besties, I can assure you. 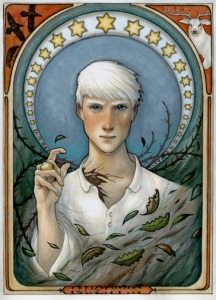 QUENTIN COLDWATER : He’s been obsessed with the Fillory books since he was a kid, and grew more and more disappointed that real-life didn’t compare to what happened in Fillory and someday, his dreams come true. He finds out that magic is real, and gets to learn and study it and, more importantly, this world he’s been daydreaming about since he was little ? Well, turns out it’s real too and he gets to go there. Now imagine being told that magic is real and being handed your Hogwarts letter. That’s how it felt like for him.

HAZEL GRACE LANCASTER : An Imperial Affliction is the book Hazel is obsessed with. This book has the particularity of ending in the middle of a sentence, meaning that the main character, whose POV Hazel was following as she read along, dies and the story ends with her. Of course, it means she wants to know everything that happened after that, what happened to the other characters and all those story lines that were left unfinished. It left such an impact on her that she travelled all the way to Amsterdam to meet the author and ask him her questions.