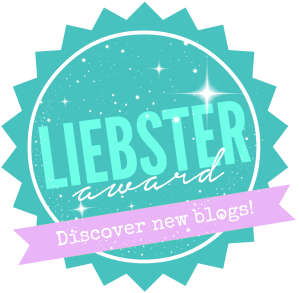 I was nominated for the Liebster Award by the lovely Abby at BookishBarrister ! Thanks a lot ! Now I really feel like I’m part of the blogging community.

And, here are the rules :

I didn’t know it would be this hard to think of what to say about myself, and to find questions for you guys to answer (no, I’m lying, I totally knew the second would be extremely difficult), so I hope you’ll like them.

1. Why did you start blogging ?
I needed an outlet for all my crazy, rambling, bookish thoughts. It had been on my mind for a little while, and when Book Riot savagely rejected me (I’m kidding !), I finally decided to give it a try.

2. Who would you want to play you in the movie version of your life ?
ELLEN PAGE !!! Sorry, erm, Ellen Page. We’re both tiny, skinny brunettes with brown eyes. She’s way prettier, though, but it’s a movie, so it’s a given.

3. Likewise, if you could play anyone in a movie, who would it be ?
First of all, there’s a definite chance that it’d be a movie musical, so probably Penny from Hairspray, or one of the girls in Pitch Perfect ! (also Step Up, the first or second, though. Everything that came after is meaningless).

4. Who is your favorite musical artist ?
If we’re talking favourite of all time, then it’s undeniably Queen. Otherwise, it’s a tough battle between Ed Sheeran and Bastille.

5. Do you have any weird talents or habits ?
I’m good with faces, but I don’t think that’s especially weird … My bookshelf organisation process is definitely a weird habit, though.

6. What is a book that you always seem to recommend to people ?
The Fault In Our Stars, for some reason. It usually pays off though. And more recently, I’ve been pushing a few friends to read The Raven Boys because these books are awesome !

7. Do you collect anything interesting (besides books) ?
Clothes tags ? Like, the pretty ones with the brand on it, like those. I have a shoebox full of this sort of tags, and I used to use them as bookmarks. Even my brother still gives me the tags whenever he buys new clothes. Choosing one was a really thorough process, because the colours had to match the book cover, but also somehow not clash with the theme of the book (like, not something too modern for a medieval story for example). I stopped when I moved out, and I mostly use Book Depository bookmarks now.

8. What is one thing you hope to accomplish soon ?
So many things ! But mainly, to be a more effective reader and blogger.

9. Are you a coffee drinker ?
Not at all. I negate the powers of coffee apparently because it makes me terribly sleepy.

10. Do you have any pet peeves ?
Doors banging, children crying, furnitures moving, basically all loud noises.

11. Do you prefer paper books, e-books, or audiobooks ?
Paper books, all the way ! I’m not reading the same way whether I have the book in my hand, or whether I’m reading off my phone or my laptop, I’m more committed with the physical copy. As for audiobooks, I wanted to try, but it’s so not for me, I can’t concentrate if I don’t see the words.

2. The saving screen picture on my phone is Colin Firth.

3. I’ve discovered the term “demisexual” about two years, and I’ve been really grateful since then.

4. I got a tattoo when I was 16, after pestering my parents for years to know if they’d let me get one. I haven’t gotten one since then, but I know exactly what my next will be, even though I don’t when I’ll be able to get it. And if I had infinite money and a job that allowed me to do it, I’d already have both arms completely covered by now.

5. I’m from a tiny island in the south of France called Corsica, which no one knows even though we gave the world Napoleon Bonarparte ! (and you should come around here, we’re not particularly sorry about it either).

6. I don’t particularly like children – even though they tend to like me a bit too much – (but it really depends, my goddaughter is awesome and I love her, but I also don’t have to take care of her 24/7, so …) and people always look at me funny when I say that I don’t want any, ever.

7. I’m a Hufflepuff through and through. I would have gone through a terrible identity crisis if Pottermore had placed me anywhere else.

8. I’m terrified of dinosaurs since I’ve seen the first Jurassic Park (and also because around that time, I watched a sort of documentary about dinosaurs and I remember one of the scientists interviewed said that someday they’ll be able to clone dinosaurs’ DNA, but he made it sound as if they were almost there ! And I didn’t understand why they didn’t see how bad this idea was, and basically had a lot of nightmares about it), and even though I loved Pacific Rim, it made terribly uncomfortable.

9. The end goal since I was 14 has been to move to London. I got closer since I’m in Paris now, but I’m still not there yet.

10. I’m a lazy cook but I love to eat, which is a problem. Although, I’m usually more motivated when I bake.

11. I wanted to be a dancer when I was a kid (*cough*still do*cough), and I’m forever sad that I didn’t pursue this career.

1. Which fictional character do you wish were real ?
2. What is the longest book you’ve ever read ?
3. Any book you wish you could reread for the first time ?
4. What’s your favourite things about blogging ?
5. If you could live inside a book, which one would it be ?
6. Which author would you most like to meet ?
7. If you could have any of your questions about a book answered, what would it be ? (ex : what happens to Gale after Mockingjay ? etc)
8. Which book do you have no intention of reading ?
9. Are you more Amazon or your local bookstore ?
10. Which character’s death was just too real to handle ?
11. If you could have a bookish-themed wedding, what theme would you choose ?

Sidenote : A link to this post can be found by clicking on the Liebster Award button on the right column.